Does a dog have Buddhanature? How about a cat?

Bodhisattva Service at the Maryland SPCA 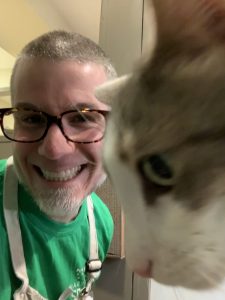 In Feburary of 2019, Hoshi Ryūshin began volunteer work at the Maryland SPCA. Although he had intitially intended to begin his service as a Dog Deputy, a broken foot precluded him from walking for long distances. Instead, he received training as a Cat Cuddler and, shortly after, as a Nursery Nanny which allowed him to work with both adult cats and new born kittens. After getting 9 months under his belt as a volunteer (and once his foot healed), he also received  training as a Dog Deputy. As an SPCA volunteer, Hoshi Ryūshin helps to socialize cats and dogs to get them used to the idea of living with new humans. He also has the distinct honor of introducing the temporary residents of the shelter to people who are looking for new canine and feline companions. As of March 2020, Hoshi Ryūshin has been able to assist over 50 cats find their new “forever home.”

Hoshi Seichō recently announced the start of the Clare Sangha "Backpacks for the Homeless" service project. Here is the full announcement:   The Concept: To fill backpacks to be given away to homeless people or others in need, for free, which contain basic living...